The Mongooses of Hawaii

Everybody loves the idea of a Hawaiian vacation home: a private piece of paradise for your family and friends to enjoy for a glorious week or two. One imagines encountering tropical birds and vibrant marine life at the beach. But how about a mongoose? 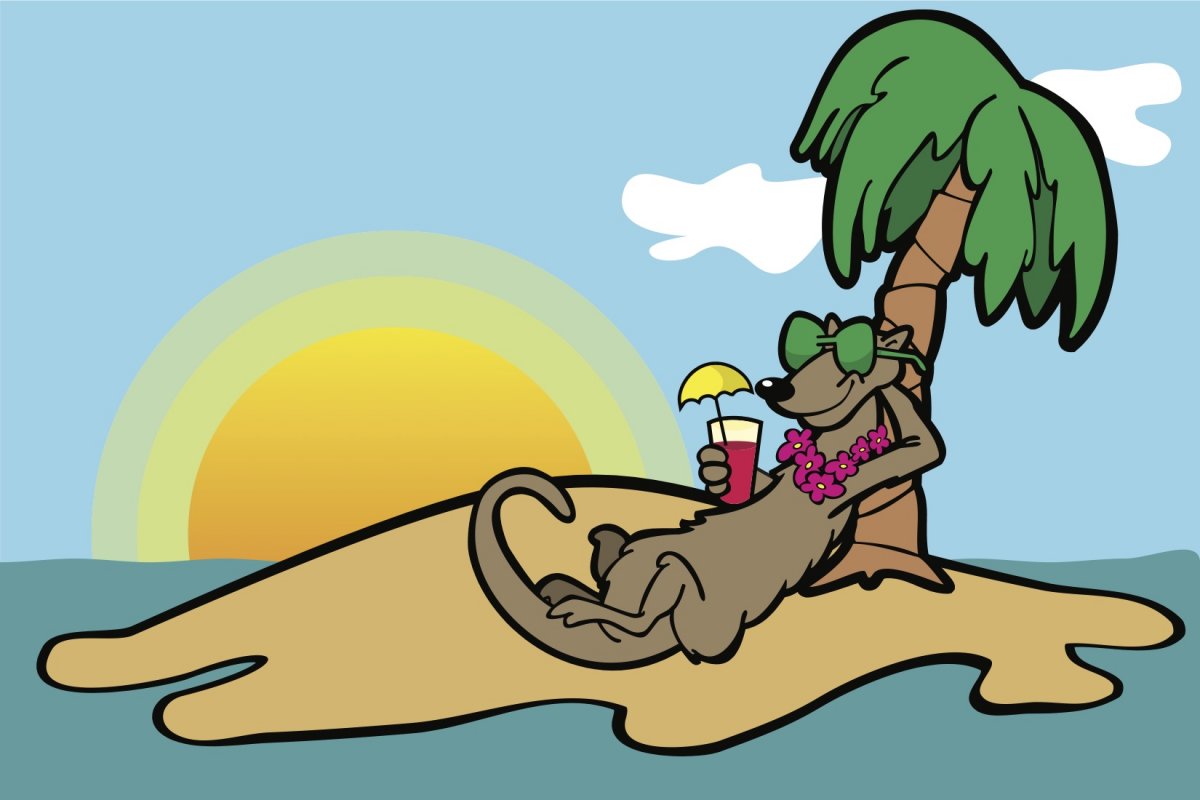 Mainlanders renting a Hawaiian vacation villa may see the scampering little creatures in their yard and, mistakenly, identify them as Hawaiian squirrels. In fact, these darting little critters are relations of Rikki-Tikki-Tavi and Timon.

Both a fun curiosity for visitors and a pest for local environmentalists, this curious and frenetic little creature will likely be seen, at least fleetingly, on any visit to Hawaii and stay at a vacation villa on Maui, Oahu, and the Big Island.

What is a mongoose?

“Mongoose” is the popular name for 29 of the 34 species in the family Herpestidae. The Small Indian mongoose (Herpestes javanicus) is the one people will see in Hawaii. Meerkats like Timon (The Lion King) belong to the species Suricata suricatta. The different species are native to Africa and Asia. 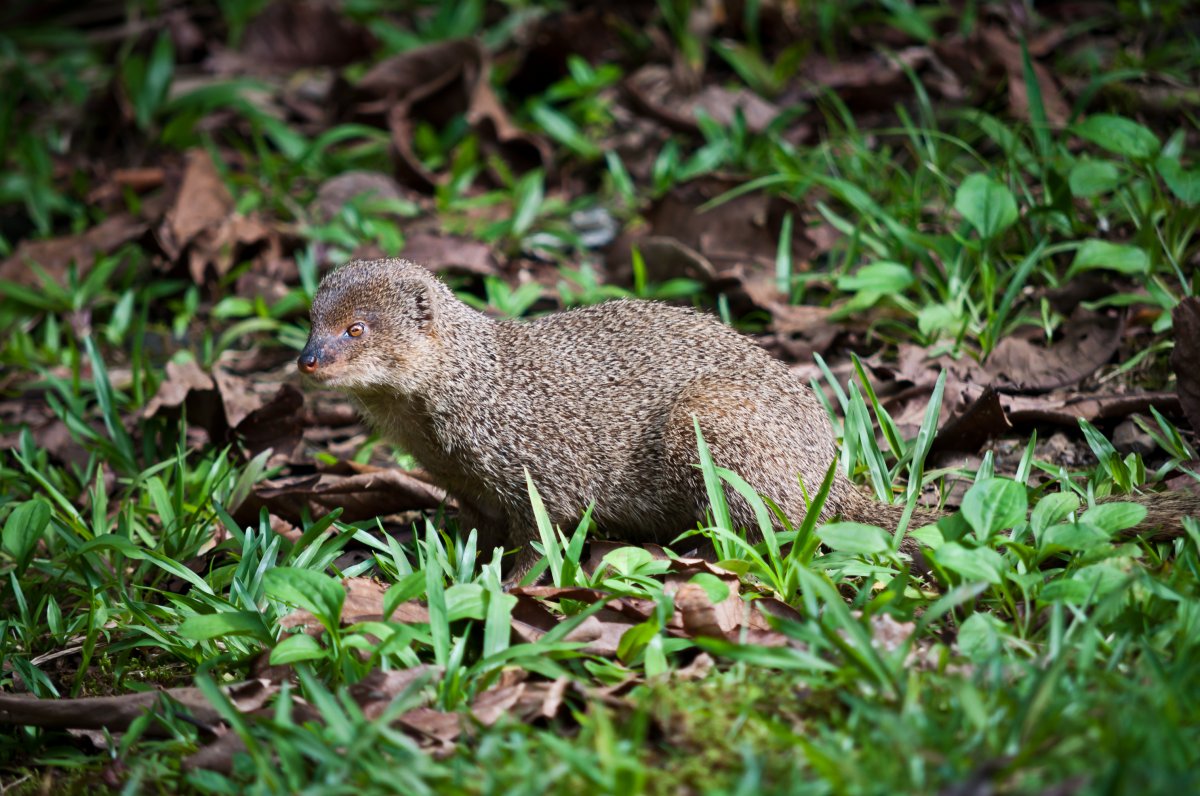 The small Indian mongoose looks a bit like a weasel, with a pointed nose and rounded ears, and its fur is brownish. It can grow to be 26-inches long, with the male being larger than the female, and has a long body and tail with short legs – but it can dart about at seemingly remarkable speeds! If you ever watched the animated cartoon “Rikki-Tikki-Tavi,” you will find the real-life version to be very similar in the lightening-speed and keen awareness that Rikki-Tikki-Tavi displays in movie.

Nope, it’s not a squirrel kids!

The mongoose is sometimes mistaken for a squirrel, even though there are no squirrels in Hawaii. This can be a fun factoid to discuss with kids who may think they are seeing the usual little yard critters darting about your vacation home’s backyard. This can be a great way to introduce the story of “Rikki-Tikki-Tavi,” to young children.

The story of Rikki-Tikki-Tavi

Rikki-Tikki-Tavi is probably the best-known portrayal of a mongoose. It is part of “The Jungle Book” collection of short stories by Rudyard Kipling, and it also inspired a Chuck Jones cartoon made in 1975 (Here’s a clip of the movie on YouTube: https://www.youtube.com/watch?v=Kl7f2ytS7Vw)

As per the story, the title character was a young mongoose who was nearly killed in a flood. An English family found him and nursed him back to health. Rikki gratefully stayed with the family and protected them from all the venomous serpents in their part of India, particularly the cobras Nag and Nagaina. While king cobras really do look after their eggs as in the story, real mongooses are unfortunately not as friendly as Rikki-Tikki-Tavi. They will typically dart around so quickly that it’s hard to focus on them let alone get near them, as the slightest movement will send them running. It goes without saying, as with any wild animal, enjoy mongooses from afar.

However, parents can point out that a squirrel’s eyes are on the side of its head, while a mongoose’s eyes face forward like those of many other carnivores.

A mongoose can also be sometimes mistaken for a rodent aka rat. Rats do run low to the ground like mongooses, but rats are generally nocturnal, while mongooses are active during the day.

So, how did the Mongoose establish itself in Hawaii?

In short: it was deliberately introduced. The backstory is interesting and cringeworthy from the luxury of our contemporary perspective, and knowledge of the fragile nature of isolated ecosystems. It starts many thousands of miles away, in the Caribbean. 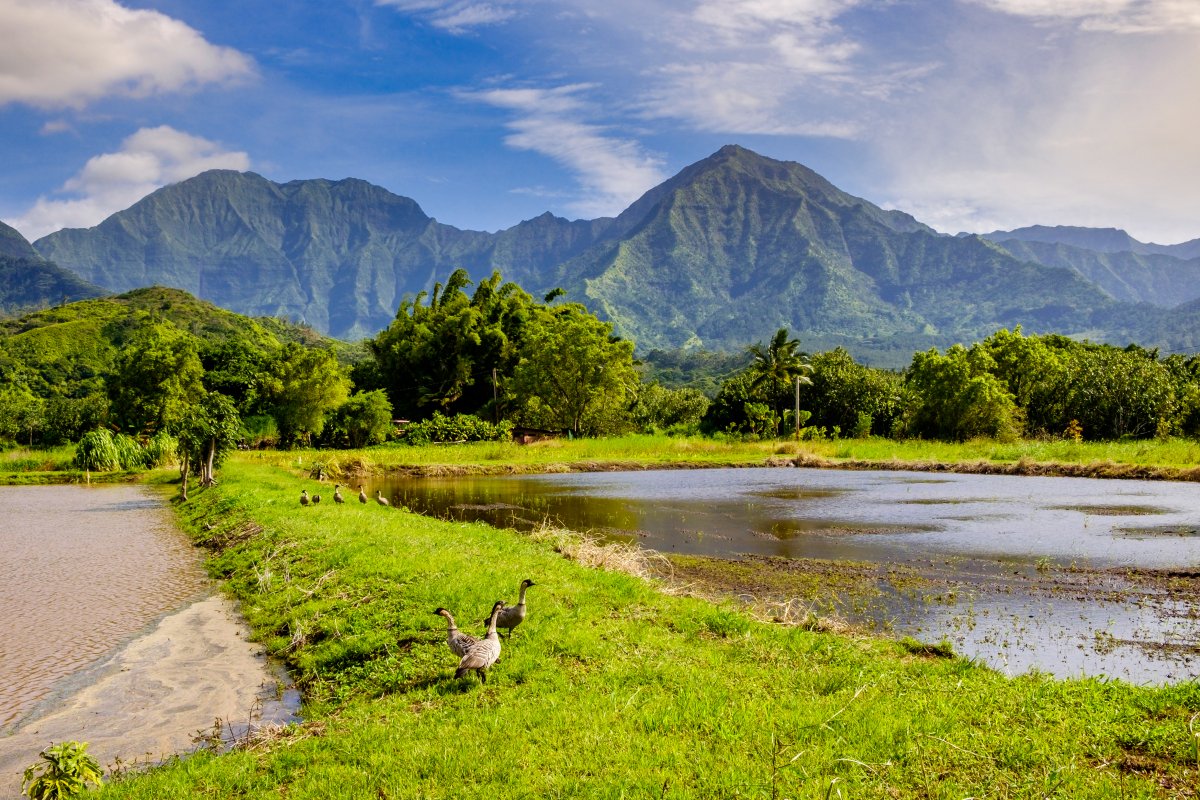 Back in 1872, a sugar plantation owner imported nine mongooses form India and released them on his plantation in Jamaica in the hopes that they would kill the resident rats. Believing that he had solved his rat problem, the planter published a paper about his mongoose success. Other plantation owners then bought the offspring of his mongooses and released them on several Caribbean islands, including Puerto Rico and Cuba.

Around 10 years later, several sugar companies imported mongooses from the Caribbean and released them on the Big Island, Molokai, Maui, and Oahu (not Kauai). Again, the plantation owners were hoping that the mongooses would kill the pesky rodents damaging their sugar cane crops. While mongooses will make a meal of rats, they will only do so if they encounter them. But remember, since rats often sleep during the day when the mongoose is active, they often do not cross paths. Other animals, however, are not so lucky.

What does the mongoose eat?

As fans of the Rudyard Kipling story “Rikki-Tikki-Tavi” know, some mongoose species are famed for their prowess in killing snakes – including the deadly Cobra! However, the mongoose is an opportunistic predator and carnivore, and, like Rikki Tikki Tavi, seemingly fearless.

Other items on the mongoose’s menu include insects, other small mammals, reptiles, and birds. The last two are very problematic from an ecological standpoint. Mongooses enjoy eating eggs, including those of sea turtles and ground birds. This is an issue for Hawaii, as sea turtles and many of Hawaii’s birds are endangered.

The nēnē, a native Hawaiian bird, has been particularly impacted by the mongoose, but conservationists are working hard to help them bounce back, and nēnēs can be seen on many islands, especially Kauai, which is mongoose free…for now.

Unlike their meerkat relatives, the small Asian mongoose is generally solitary, but some males do live in groups that share burrows. Thus, if you see a mongoose at your Maui vacation rental, its roommates and/or relatives are probably close by. 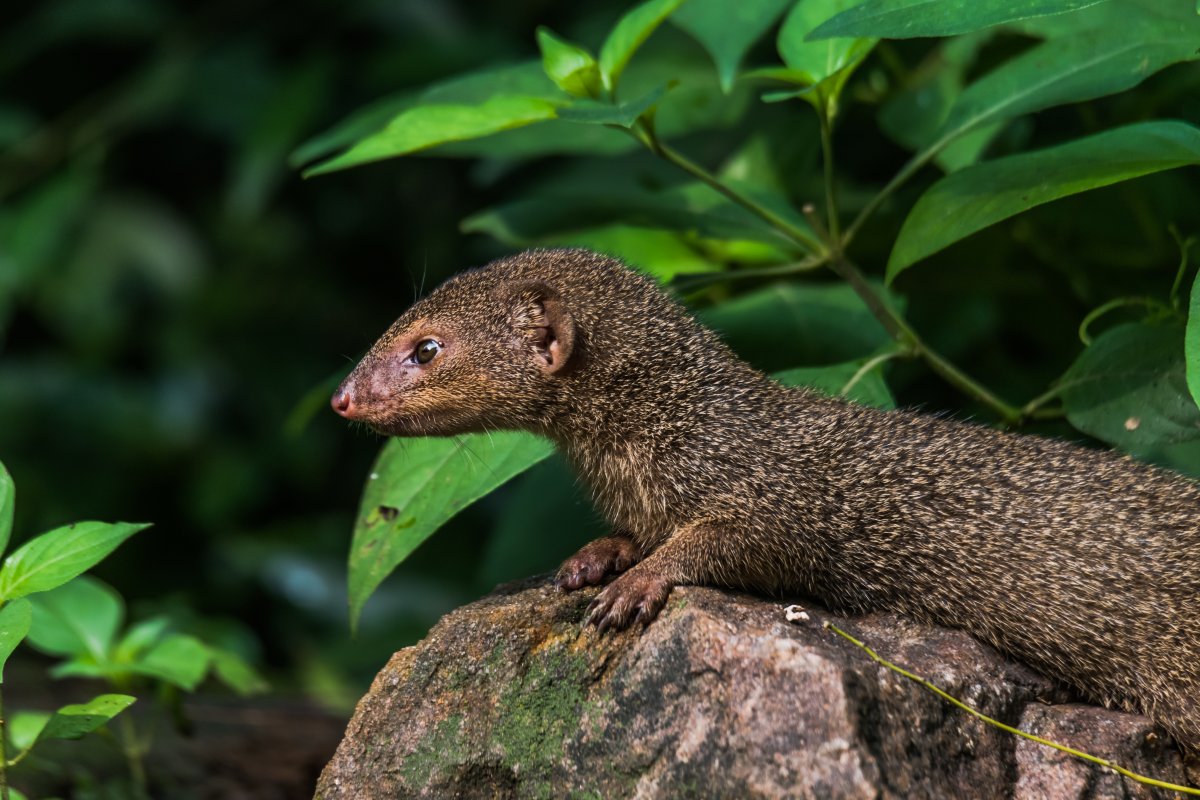 Mongooses can live in a wide range of habitats that include coastal areas, farmland, wetlands, grasslands, and forests, be they natural or planted. A mongoose can certainly make its home outside your Maui villa—especially if some other animal left a burrow available. Mongooses generally don’t dig their own burrows, so they help themselves to abandoned dens.

Keep an eye out for these little animals 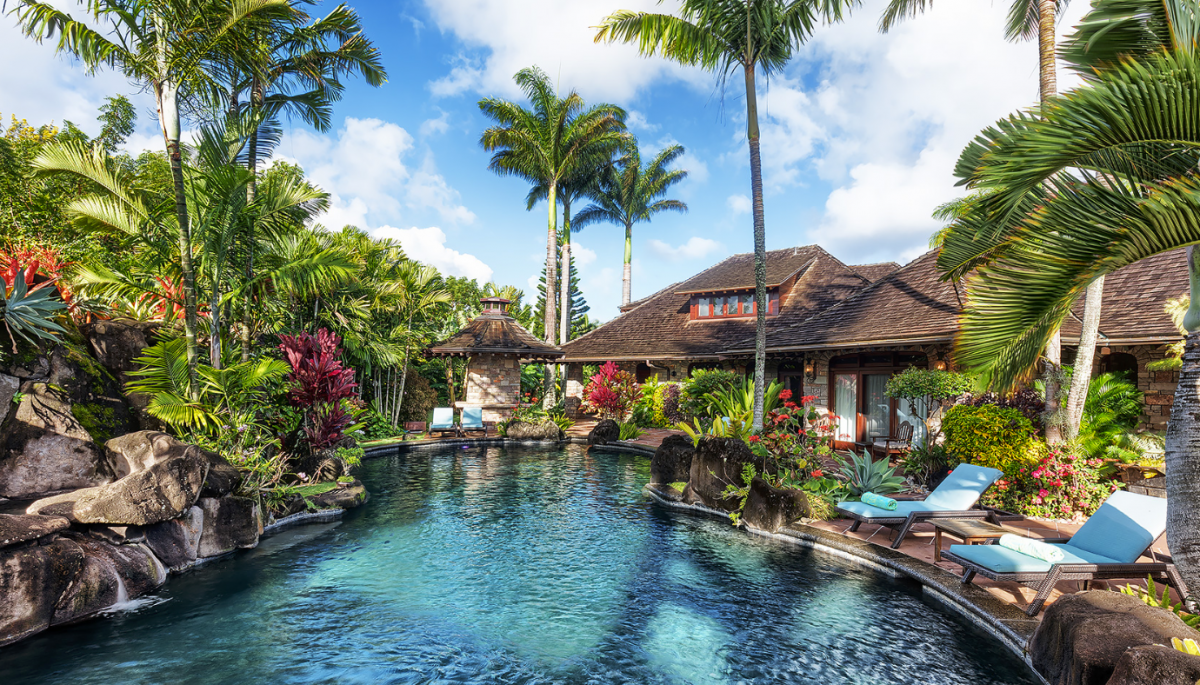 When you are relaxing in your Maui, Kauai, or Big Island vacation villa or lounging quietly by the pool, you may be lucky enough to see one these interesting invaders darting across the yard through the windows of your villa, searching the yard for insects. If so, keep still, and enjoy the show!